Evolution of the Baybayin Script

Below is a chart showing the evolution of Baybayin from the traditional version (Tagalog Doctrina) to the most recent attempted modifications. 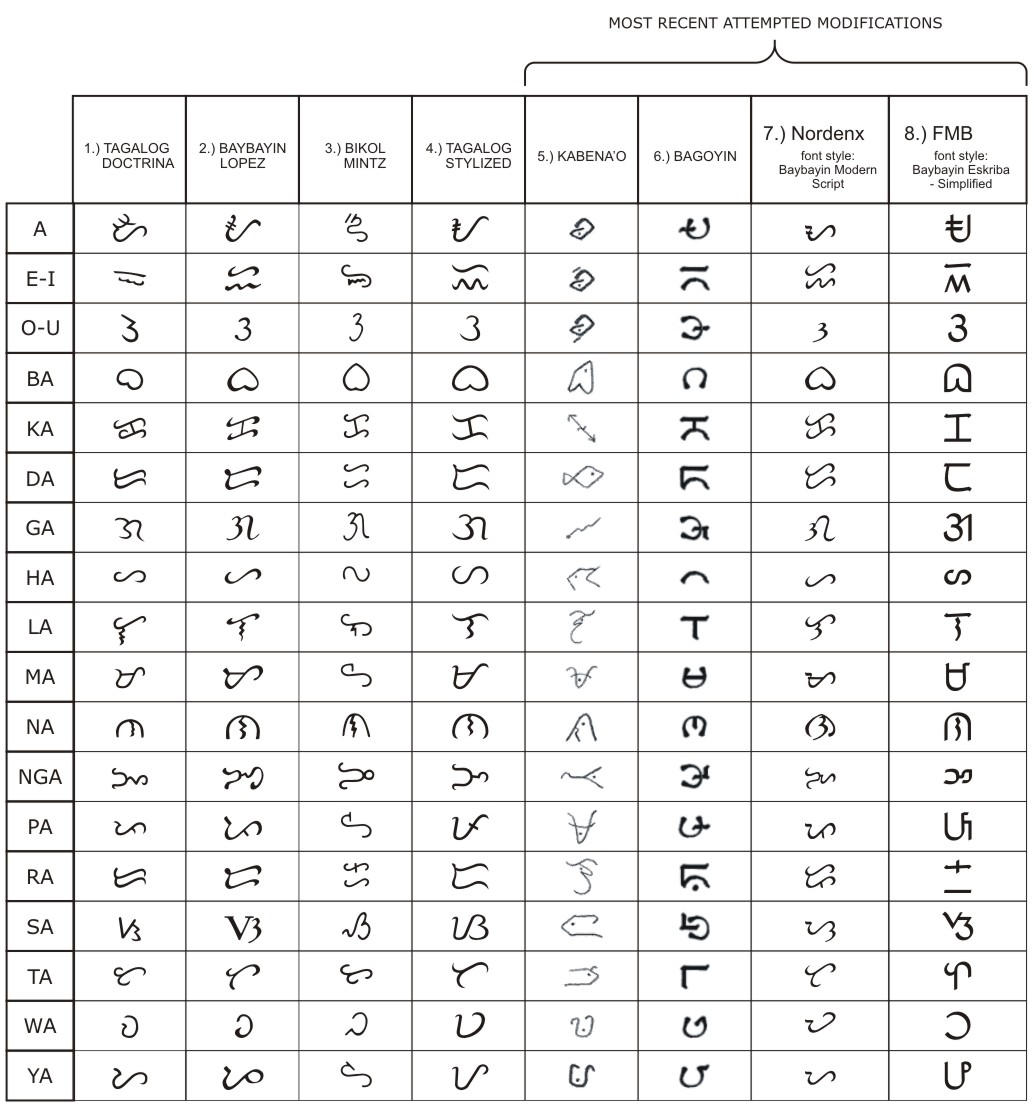 - is based on the typeface used in one of the very first books printed in the Philippines, the Doctrina Christiana of 1593. It is the earliest documented form of the Baybayin. A virama ("+" shaped) kudlít is included with this font, although it was not introduced until 1620 in the Ilokano version of the Doctrina Cristiana. For more details, see Christusrex-Tagalog.

- is based on the typeface of the Ilkoano book, Libro a naisurátan amin ti bagás ti Doctrina Cristiana… written by Francisco Lopez in 1620 but bearing the publishing date of 1621. It also appeared in two earlier Tagalog books, Arte y reglas de la lengua Tagala (1610) by Francisco Blancas de San Jose and Vocabulario de lengua Tagala (1613) by Pedro de San Buenaventura. Lopez also used this font in his Arte de la lengua yloca of 1627. There are at least two versions of this typeface. This version was most likely hand-traced. The 1895 reprint of the Ilokano Doctrina shows a more compact version with exaggerated curves and loops. Lopez introduced his “reformed” spelling with this typeface in 1621 but it did not succeed. This was the only typeface to include his + kudlit while the baybayin script was still in common use among Filipinos. For more details, see Ilocano (Ilokano) at Omniglot.com and Christusrex-Ilocano.

- is modelled after the cover art on the Bikol-English Dictionary (1985) by Malcolm Warren Mintz & José Del Rosario Britanico. It's source was an 1835 table of “Ancient characters with which these natives of the Tagalogs and Camarines used to write” (Carácteres antíguos con los que escribian estos Naturales del Tagalog y Camarínes), from the Pascual Enrile collection 18 of the Biblioteca del Museo Naval in Madrid. (ms. 2287, doc. 32:214-214v.)

- is a modern composite of many examples from the past. It is based primarily, though loosely, on what was my first acquaintance with the baybayin, an excerpt from Lope K. Santos' Balarilà, 1946. His script resembles one found in Fr. Gaspar de San Agustin's Compendio de la Lengua tagala, 1703. This present font should not be considered a historically accurate example of the baybayin. The characters’ shapes, sizes and weights have been made uniform in order to present a neat and elegant printed appearance. For more details, see Baybayin Symbols Chart.

- is the creation of Alfie Verra Mella (elf.ideas@gmail.com) and is based on the Tagalog/Alibata script. It appears in a book entitled Engkanto: A Bestiary of Philippine Mythical Beings (Book One: Bantay-Katubigan) which aLfie is currently writing. In the book the script is used to write the language of the bantay-katubigan (Philippine aquatic fairies).

- created by Joseph Barretto (joopynyc@yahoo.com), bagoyin is a writing system based on the Tagalog script. Bagoyin comes from bagong baybayin, or "new script".

Bagoyin came about after a mental game of "what if". What if the Spaniards had allowed the Filipinos to retain use of their script? What if the script had evolved in form and new letters were added to encompass foreign sounds? Bagoyin is one imagined outcome.

No posts.
No posts.
Home
Subscribe to: Posts (Atom)